The store will not work correctly in the case when cookies are disabled.
International 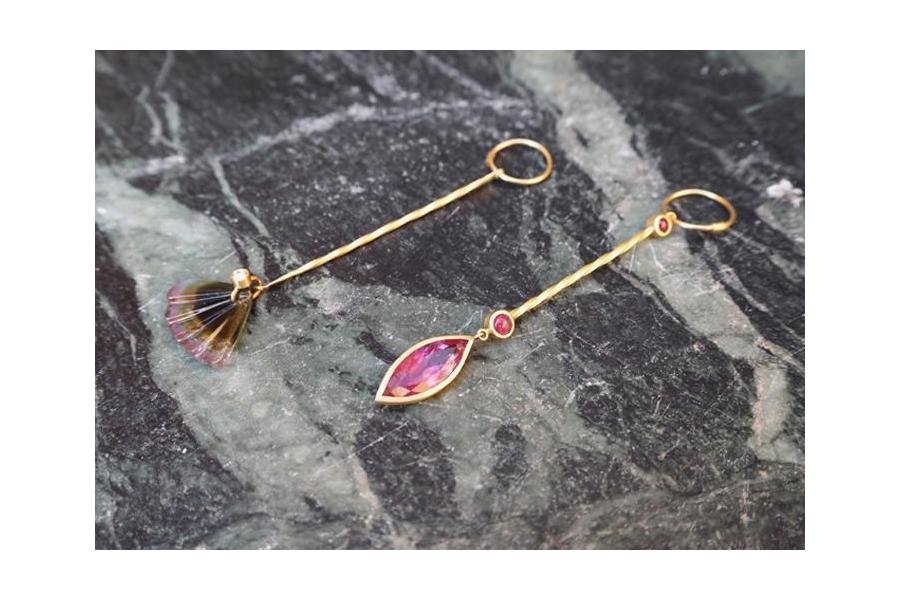 Sparkling diamonds are a girl’s best friend, but what about all the other beautiful stones that can adorn your jewelry? Learn more about them here.

Diamond
The diamond is the most popular of the precious stones and the hardest mineral we know. All diamonds are like fingerprints - each individual diamond is completely unique and Jane Kønig only uses conflict-free diamonds in her jewelry. Most diamonds are pale yellow, while colored diamonds are extremely rare and valuable. It’s the cutting that brings out the sparkling beauty of the stone, and there are several ways to do this, with brilliant cutting being the most popular.

Brilliant
A brilliant is a diamond cut with up to 58 facets for optimum light reflection and sparkle.

Rose cut diamonds
This cutting is the old-fashioned way of sharpening precious stones – and began before brilliant cutting became popular. It gives the diamond a beautiful effect with a flat bottom and 12 or 24 triangular facets on the curved top.

Opal
Opals are found in caverns in volcanic rocks, where they formed millions of years ago. Each opal is unique. They come in all the colors of the rainbow, but have one thing in common: A striking play of color, which changes with the light.

Onyx
Onyx is a special type of chalcedony mineral, which consists of several layers in different white, red, brown and black shades. Most onyx stones contain both black and white layers, but can also be all black, which is the most rare and therefore the most sought-after.

Rose quartz
Rose quarts is known as The Love Stone and varies in color from pale pink to stronger dark pink shades.

Aquamarine
Aquamarine is named after the sea, and most of these stones are transparent with blue or turquoise shades.

Serpentine
This stone is known for its fine, dusty moss green color. The stone has a waxy surface and is silky smooth to the touch.

Malachite
Malachite is a copper stone with a swirly pattern of stunning green shades.

Tsavorite
Tsavorite is a transparent precious stone, which can vary from a light to a more intense green color.

Agate
Agate consists of chalcedony, and is a volcanic stone that can have many different colors. It is often dark on the outside with wavy red-white or brown-white stripes inside.

Baroque pearls
No two baroque pearls are the same. They are completely unique in size and shape and stand out from standard pearls by not being completely round. These imperfect pearls create a modern and slightly edgier look.

Coral
Coral has an intense color spectrum that spans 8-10 reddish hues and is also known as red gold. Jane Kønig uses the red Mediterranean sea coral, which is collected legally from the sea around the Italian coast.

Elisabeth Taylor
The American actress was known as the diamond diva and had an impressive jewelry collection. Following her death, her Cartier necklace with pearls, rubies and diamonds was sold at auction for 65 million kroner.

Beyoncé
If you like it, then you shoulda put a ring on it, Beyonce sings in her hit single Single Ladies. And that’s exactly what Jay-Z did when he spent a rumoured 33.5 million kroner on Beyoncé’s 18 karat emerald-cut diamond ring.

Lady Gaga
At this year’s Oscars, Lady Gaga waltzed up the red carpet with nothing less than the world-famous Tiffany diamond around her neck. The valuable diamond is made from 128.65 karat and is valued at just under 200 million kroner.

Did you know that…?
The world’s most expensive diamond is The Pink Star, and sold in 2017 for 496 million kroner. The giant diamond is of 59.6 karat and weighs 12 grams.
Source:Ritzau

Find the jewlery here ...
2 years ago
Did you like this post?
0
0
Recent Posts
Categories
Search The Blog